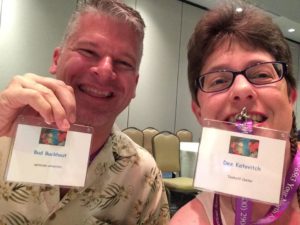 This famous quote about change describes my experience in the development of inclusive higher education for students with intellectual disabilities.

When I started researching possibilities ten years ago, there was next to no information about how to include students with intellectual disability at the college level. I searched the internet for articles or websites, but found very few. And anyone I asked about this option answered the same way:

People would nod politely when I mentioned the idea and casually change the subject, even colleagues who worked in special education. Inclusive higher education just seemed too hard to grasp and eyes glazed over when I tried to discuss it. So, I set out to find people who had tried it.

I had a chance to talk to a parent who advocated for a higher education experience for her daughter back in the 1990’s. The special education team in her daughter’s school thought she had lost her mind. They laughed off her questions and efforts to make such a thing happen for her daughter. They argued with the mom about the wisdom of even trying it.

Until her daughter did it- went all the way to Vermont from her home in New York, lived in a dorm, and graduated with a certificate, too.

I started visiting programs on college campuses in 2007. A program staff person told me that she heard professors comment that her students were just “playing college”. Even at a national conference in 2012, when I talked to conference goers about inclusive higher education, they hemmed and hawed, and replied this way:

“Well, this might work in some places, but our college/university is an academically rigorous institution.” (I didn’t mention that Syracuse University is designated as a top tier research institution. Or that I didn’t even recognize the name of their university). Two years later, our table at that same conference was swamped; students with intellectual disability were coming to colleges around the country and people genuinely wanted to know about inclusive higher education.

A few years later, I attended the annual Association of Higher Education and Disability (AHEAD) conference, and went to a panel session on inclusive higher education led by our friends at ThinkCollege. There was a lively discussion, including some challenging questions about setting up credentials, dealing with university policy, and many other subjects. Even though the conversation was tough, I got terrifically excited. This was the fight stage! I realized that during that session with all of those tough questions that colleges and universities were starting to take inclusive higher education seriously. These options were not just going to go away; our students and our work belonged in higher education!

InclusiveU received a prestigious federal grant from the Department of Education in 2015 that is helping us expand our initiative that delivers inclusive options at SU for students with intellectual disabilities. This July, there was a grant directors’ meeting right before the annual AHEAD Conference. None other than the President of AHEAD, Bea Awoniyi spoke at the conclusion of the meeting, and there was a day of sessions at AHEAD specifically on inclusive higher education.

One of the sessions got quite heated: difficult questions were posed by university personnel who are not convinced that inclusive higher education is a good idea. It reminded me that, while we’re making progress in these initiatives, the fight isn’t over yet. While SU has welcomed our InclusiveU students, we are connected to programs across the country that are not so fortunate. We share ideas and war stories, and continue to build a strong case for including students with intellectual disabilities in colleges and universities around the country. The fight is long, and it is far from over. But we will keep on working, because we know what will happen next.

We are all going to win.

About the Author: Diana “Dee” Katovitch is the Coordinator of the Peer2Peer Project at InclusiveU and Assistant Director of the Taishoff Center for Inclusive Higher Education. She graduated from Syracuse University (B.S. School of Education ’90; Certificate of Advanced Study in Disability Studies, ’14) and SUNY Cortland (M.S. in Reading ‘95). She worked for 21 years as a special education teacher in NYS public schools. What began as a personal research project on post-secondary education for students with intellectual and developmental disabilities resulted in her book The Power to Spring Up: Postsecondary Education Opportunities for Students with Significant Disabilities (Woodbine House, 2009). Her new book, Beautiful Children, about the first school for children with intellectual disability in the United States, will be released in Fall of 2016.